GUE/NGL at the Athens Alter Summit

Report from GUE/NGL Seminar 'Austerity and the economic external agenda of the EU'
Alter Summit, Athens (7/06/13) 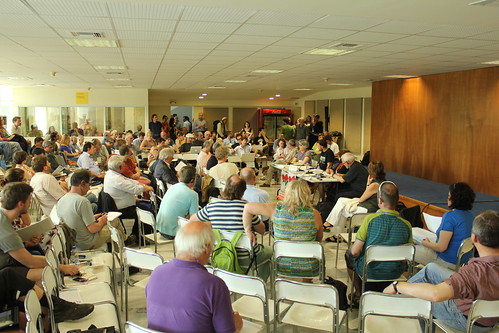 In parallel to the Alter Summit, the GUE/NGL Group organised a seminar on the link between austerity measures and the external economic policies of the EU, which saw voices from social movements, economists, politicians, as well as people not attached to any political movement, all take the floor.

Against the backdrop of the ongoing austerity drive in Greece, the aim of the Alter Summit was to build pan-European resistance to austerity policies that put economic competitiveness before people.

One of the main themes broached was how to continue the global anti-austerity movement when many of those who have pushed for austerity all along are now trying to adapt their narrative.

“They are changing the rhetoric but they are not changing the policy. We have to go beyond ‘stop austerity’ and get detailed about alternatives like writing down debt,” said GUE/NGL MEP Paul Murphy.

“Social democrats are now denouncing austerity, their thinking is that austerity was necessary as an emergency measure to foster economic growth and create jobs but now it has gone too far,” said Asborn Wahl (Norwegian Union of Municap and General Employees/Campaign for the Welfare State). “But in fact, we know that the aim from the beginning was clear: dismantle the welfare state and defeat trade unions.”

“The situation we find ourselves in today is not a recession or a crisis, it is a robbery,” he said.

He also talked about the link between what is happening in the EU today and what we have previously witnessed in Latin American and Asia: “Countries in Asia and Latin America have already suffered from this creation and exploitation of debt. And when we look at the European Semester, the Euro Pact, and the Fiscal Pact etc. they all look like the structural programmes that were imposed in the Global South.”

Pedro Paez (Economist, Ecuador) echoed these sentiments: “The IMF is trying to 'Latin-Americanise' Europe in the same way they tried to 'Africanise' Latin America. We need a new type of public bank and the socialisation of finance. We need to control free trade and the free circulation of goods.” 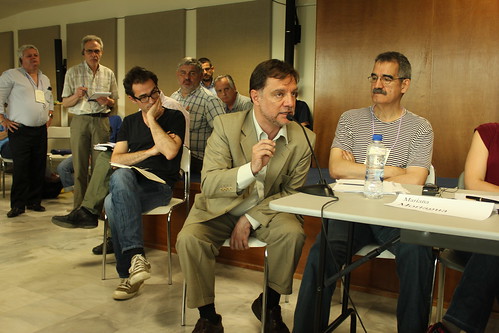 Tom Kuchavz also categorically called for the EU/US trade negotiations to be stopped in their tracks, a view echoed by many of the speakers who took the floor at the seminar.

“We need to convince the trade unions that we must outright reject the negotiations and not just try and influence them.”

Mariana Mortagua (Portuguese economist) highlighted that while the impact such a deal would have on culture is problematic, there remains many other problematic issues that we should not forget about such as the impact on workers' rights

She also called for a major change to the European Central Bank's statute given its high concentration of power that falls under little democratic scrutiny, the introduction of public credit rating agencies, an EU-wide financial transaction tax and an abolition of tax havens.
“Forcing societies to accept measures outlined in Memorandums of Understanding is a form of the 'shock doctrine'. We must replace the neoliberal agenda with a programme of social and ecological reforms,” she added.

Tom Kuchavz also lambasted the EU's increasing military spending amid across the board cuts to social welfare, its complicity in the drone war, as well as its continued support of dictators in Uzbekistan and Turkmenistan.

Paul Murphy added: “The EU’s external and internal agenda are two sides of the same coin. We should take the scepticism we have of the EU’s approach to other regions in the world and apply it internally.”

Debbie Valencia, from the Campaign for Migrant Domestic Workers highlighted the plight of migrant domestic workers and the urgent need for recognition of the work that goes on behind closed doors in private homes.
She outlined how millions of domestic workers, who are among the lowest-paid workers in the world, are denied fundamental rights resulting in exploitation, violence, and abuse. They are also excluded from labour laws and are not allowed to join unions. She called for the protection of all domestic workers regardless of their immigration status and a strengthening of the self-organisation of migrant workers. 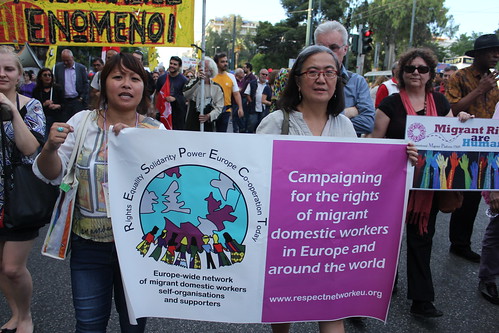 She discussed the ILO (International Labor Organisation) Convention on Domestic Workers, which sets out labour standards for domestic workers, and the need for governments to integrate it into national law. Under this international legal instrument, domestic workers will have rights such as entitlement to social protection and annual leave, collective bargaining and protection from abuse. It was adopted in June 2011 but so far only Uruguay, the Philippines, Paraguay, Bolivia, Italy, Mauritius, and Nicaragua have ratified it.*

Debbie Valencia also drew attention to worrying developments in Greece for migrants such as campaigns driven by the far-right to get asylum seekers out of Greece and a sharp increase in racial attacks.

GUE/NGL MEP Helmut Scholz talked about the need to combat the rise of the far right across Europe: “We must reject all forms of fascism.”

The importance of solidarity with the people of Greece was a key theme of both the seminar and the Alter Summit generally.

“As widespread poverty helps cultivate this xenophobia and racism and people continue to be pitted against each other solidarity remains essential,” said GUE/NGL President Gabi Zimmer. 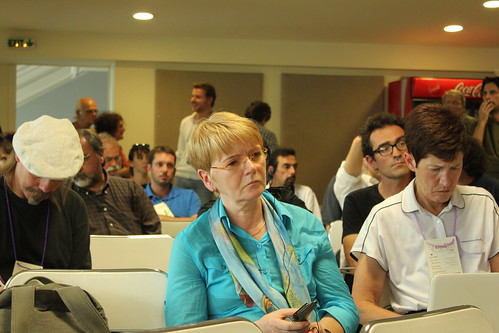 The crisis has been an excuse for the elite to attack the welfare state, democracy, and indeed the environment: something we are seeing in Greece with the onslaught of mining in mountainous areas such as in Skouries, Greece, where there is currently a growing movement against the mine, problematic because of both the damage to the environment as well as the linking of the livelihoods of workers who are dependant on the mine to environmentally destructive industries.

GUE/NGL MEP Marisa Matias said: “We must incorporate social issues into environmental ones and resist the idea that environmental issues are simply technical matters. The battle is bigger than just protecting the environment; we need to put social concerns into the centre of the fight. For example, trade unions need to incorporate environmental justice into their agendas.”

While some speakers expressed the view that the EU is beyond reform, others said that if the EU disappeared tomorrow we would still have neo-liberalism and that dismantling it would constitute a step backwards, adding that the European Union did not 'fall from the sky' and was a political project put in place by national governments.

Moderator Brid Brennan (Transnational Institute) summed up the afternoon's interventions: “We've heard a lot of views and can broadly say there are those who call for reform and those who call for revolution, those who want to dismantle and those who want to tweak. But the key idea is that internal and external policies are intrinsically linked and we must link the anti-austerity and anti-Troika movements to the global struggles against climate change and the dominance of corporate power. We need a single Left anti-neoliberal programme, a simultaneous movement.” 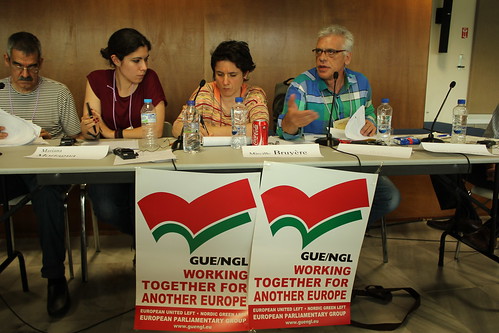 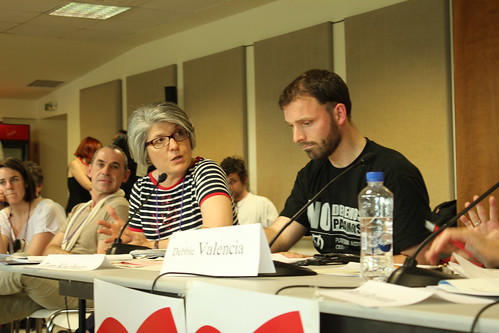 You can see some more photos from the event here.


*In March 2013 the Commission published a proposal for a Council Decision that would authorise EU member states to ratify the Domestic Workers Convention. When the dossier is sent to the European Parliament later in the legislature, GUE/NGL MEP Ines Zuber will be the rapporteur on the issue.

Amid the ongoing austerity drive, Greek people have set up networks of solidarity to take over where state services have been cut and people have been left vulnerable to poverty and social exclusion. For example, some doctors give their time voluntarily to provide healthcare for people who can no longer afford to see a doctor.

Today Helmut Scholz met with a representative from 'Anichti Poti' (Open Cities), a solidarity network that is fighting against the government's attempts to break up local council's power. The aim is to help people form urban social networks of resistance.

Yesterday, in a meeting between GUE/NGL MEPs and Syriza MPs at the Greek Parliament, Gabi Zimmer expressed her solidarity with these networks. GUE/NGL MEPs heard about how these solidarity networks are not just about survival or providing charity, they are also about dignity and bringing people together to get organised so that the struggle against austerity can continue.

Speaking in yesterday's seminar on austerity and the EU's external policies, GUE/NGL MEP Paul Murphy said: “The EU’s external and internal agenda are two sides of the same coin. We should take the skepticism we have of the EU’s approach to other regions in the world and apply it internally. EU leaders might now be changing the rhetoric but they are not changing the policy. We have to go beyond ‘stop austerity’ and get detailed about alternatives.”

Today GUE/NGL MEPs took part in meetings with both Syriza and the KKE at the Greek Parliament before hosting an exchange of views between social movements, networks and political forces on the interplay between austerity measures and the external economic policies of the EU. Lots of speakers took the floor to a packed room. A report of the main points raised is to follow but for now here are some images from the Alter Summit as the first day draws to a close.

As the fight against austerity continues across Europe, eight GUE/NGL MEPs* will take part in the Athens Alter Summit this weekend.

The two-day Alter Summit takes place this Friday and Saturday (7-8 June) and will see civil society organisations, social movements, trade unions and NGOs from all across Europe come together to develop joint agendas for action to stop EU leaders' continued neoliberal onslaught.

Just before the Alter Summit starts, the GUE/NGL delegation will hold an exchange of views between social movements, networks and political forces on the link between austerity measures and the external economic policies of the EU. It will take place in the Olympic Stadium (Room 6, Interviews Hall of Olympic Natatorium) on Friday 7 June at 14:00.

THE GUE/NGL MEPs will continue to fight for a reversal of austerity policies and for a move towards economic and social policies that will deliver growth, solidarity and job creation and that ensure taxpayers no longer have to foot the bill for reckless financial gambling.

*Participating MEPs and the main issues they are dealing with:

What you need to know about killer robots